This is a very brief general overview of the Willys-Overland Motors company.  It is designed for the absolutley beginner, or for those looking for a quick refresher on Willys history.  The goal is to get a good base in 300 words or less. For more in-depth information we recommend you check out the various Wikipedia articles about Willys and the related vehicles.  You should also check out the sites we link to on our Parts, Restoration and Forums pages.

Willys-Overland Motors more commonly referred to as Willys was a company founded by John Willys in Toledo Ohio. John got his start in 1908 when he bought the Overland Automotive division of Standard Wheel Company. Thus the combined name of Willys-Overland.

Most people don’t know this but in the early 1900s Willys was the second largest US auto makers behind Ford. Several old school Phaeton style vehicles were produced including the Willys-Knight and Stearns-Knight luxury car.

At this point automobiles were still considered a high end item only owned by the super-rich. Many of the early Willys looked similar to Ford Model T and A cars. They had the motorized carriage look with very little frills.

Like most companies of the time when The Great Depression hit Willys suffered major issues. Many of Willys high end vehicles failed. Willys decided to push forward with just two models and eventually just the Willys 77.

Introduction of the Jeep 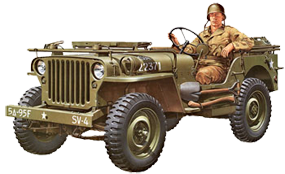 When Willys won the military contract to produce a “lightweight truck” for the World War II effort, their fortune and legacy would forever change. Willys coop’d with Ford and American Bantam to create the Willys MB.

During and after the war over 650K military Willys Jeeps were produced helping to reestablish Willys as a major player in the auto market. After WWII, Willys would drop all its previous models and plans and focus mainly on Jeep based models.

This would lead to the CJ line along with the Jeepster. Several years later Jeep would also produce the Station Wagon and Truck which were more popular initially than the CJ.  As the CJ was mainly used by farmers, rancher, hunters and similar people who wanted an off-road only utilitarian type of vehicle 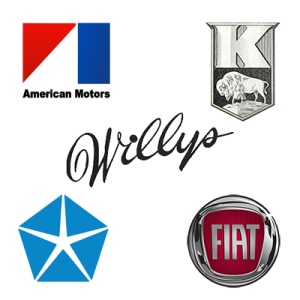 Despite a few other stabs at regular passenger cars, such as the Willys Aero and Americar Coupe; Willys was never able to penetrate the auto market for the general consumer again. Eventually in 1953 Kaiser Motors would purchase Willys-Overland renaming it to Willys Motor Company.

While Willys and Kaiser cars continued to fall in sales, Civilian Jeeps (CJ) continued to rise in popularity leading up to the release of the CJ5 in 1954. The last passenger car would be produced in 1955.   Afterwards the tooling was sent to Brazil where several various Willys models would be produced.

Kaiser-Jeep would eventually sell to American Motors Corporation (AMC) in 1970 and produced the CJ series until 1986. At this point Chrysler acquired AMC and the Jeep Wrangler became the new incarnation of the CJ.  Today Chryler and the Jeep marque are owned by Fiat, and the “Jeep” model continues to sell well and be iconic on and off the road.